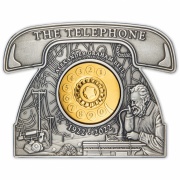 One of the most important inventors who every lived, Alexander Graham Bell created the telephone. A device which changed the world in terms of long-distance communication. Built on the progress made with the telegraph, Bell constructed a device which allowed the human voice to be transmitted around the world. The impact of Bell’s invention is still being felt today. With the television, internet, and other wire and wireless communication having links to the telephone, it is little wonder that the life and works of Alexander Graham Bell are still being celebrated today. This celebration includes the issuing of a new coin from Barbados that honors the centennial of his passing and his great achievement. Commemorative Coin The coin itself is unique thanks to the classic telephone shape instead of being a typical round coin. Consisting of .999 silver, this coin has a stated value of $5, but as a collector’s item its value may be considerably more. The features of this remarkable coin include the following. - 3 oz Silver Coin - 24K Gold Plated Moveable Inlay - $5 Coin Issued by Barbados - Limited to 999 Pieces There is little doubt that the unique shape of the coin is the most eye-catching feature. That is, until the gold inlay in the shape of the rotary dial is moved. The coin depicts Alexander Graham Bell at work on his original version of the telephone that he invented. Features While Bell can be seen in the lower right corner of the coin, complete with the table and phone to which he may be speaking his famous line, “Watson, I need you!”, the first words ever transmitted via wire. The lower left side of the coin features another classic phone design from the early 20th century. Above the phone are telephone poles and lines which crisscross the countryside. A beautiful design of wires emanates from the rotary dial with “Alexander Graham Bell” written above the dial and the dates “1922 – 2022” below. The centennial notes the year when Alexander Graham Bell passed away, which was on August 2nd, 1922. The next most notable feature is the top of the coin which is in the shape of a classic telephone receiver. It sits on top and completes the unique shape that makes this coin so unique. The overall design of a classic phone features the unique 24K Gold Plated Movable Inlay on the front which is a rotary dial. You can clearly see the numbers in order plus the stop located next to the “0”. At the center of the inlay is a beautiful star design. The protective finish of the gold plating allows for the dial to be moved with the bare hands. The back of the coin features another classic telephone design, a rotary dial design in the lower right corner. And the name “Barbados” with the symbol of the country prominently featured in the center. Now you can celebrate the life and invention of Alexander Graham Bell with this unique, beautiful silver coin. With only 999 being issued, this is a rare opportunity to purchase a stunning coin that will sure to be a conversation piece around your household for many years to come.